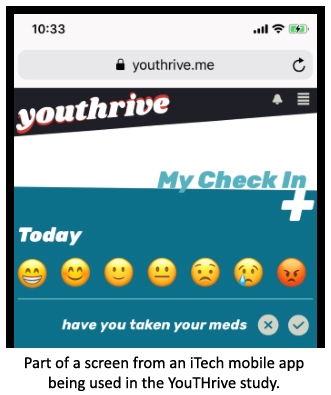 Multiple studies within the UNC/Emory Center for Innovative Technology, or iTech, project have recently moved into new phases at study sites in cities across the US.

Three study site locations opened enrollment – Atlanta, Boston, and Chicago. Enrollment is for a pilot randomized controlled trial, or RCT. A pilot study is a smaller-scale version conducted before a full-scale study is conducted later. LifeSteps PrEP for Youth study sites will test an intervention for PrEP adherence, and the pilot study will last six months. See more about LifeSteps here.

Study site locations in four cities opened enrollment – Atlanta, Chicago, Houston and Tampa. Sites that will begin enrollment in the future are the Bronx, Chapel Hill, NC, and Philadelphia. YouTHrive is a randomized controlled trial that will test the effectiveness of a newly adapted version of an existing web-based behavioral intervention for HIV care. See more about YouTHrive here.

Three of eight sites opened enrollment - Atlanta, Chicago, and Chapel Hill, NC. The other sites where enrollment will open in the future are Boston, the Bronx, Houston, Philadelphia, and Tampa.

This study will compare results from two different mobile apps, LYNX and MyChoices, for increased HIV testing or increasing PrEP use. A final app will be created combining the components that had the most impact on HIV prevention behaviors (measured by HIV testing and the use of PrEP). Read more about COMPARE here.

iTech is a project program within the ATN, with a research focus on technology-based interventions for young people for HIV prevention and care (such as mobile apps). See more about iTech here.